Delicious Mess is an interactive cookbook that incites the user to embrace the messy side of cooking. The book is used like a cooking tool, and contains fun experiments and hidden recipe parts that can only be shown when you stain it. This gives people the possibility to become more comfortable treating a book in an unusual way, and finding creative ways to interact with it.

This project aimed to explore how artefacts can generate and embody knowledge, in the context of an everyday activity. In this case, this activity was preparing meals. The end result would be a proposal of a product that would intervene in this action, creating unexpected reactions from the users.
The action I chose to explore was the interaction between dirty hands and artefacts in the kitchen. I noticed people were reluctant to touch things while their hands were dirty.

The interactive cookbook idealised aims to change people’s behaviour regarding the discomfort felt in staining a cookbook with dirty hands, while still having fun. I was looking for something that would incite the user to embrace the messy side of cooking.
I wanted my product to be able to change the behaviour, by creating a need to do so. By creating a need I also wanted to create a reward, as a way to incite the behavioural change.
For this purpose, I got the idea of transforming the book into a cooking tool, making it necessary to be stained with food ingredients.

To create this effect, I researched different reactions food could have with paper, testing dfferent methods and ingredients. The idea behind this was that while people used the book as a cooking tool, the book would respond in ways that were unexpected for them.
My idea for creating the need to cause this reactions was to have this book hide parts of the recipe, which you could only see after you stained the page with the right ingredient.
This gave me the possibility to not only hide recipe parts, but include playful surprise pages for the user. 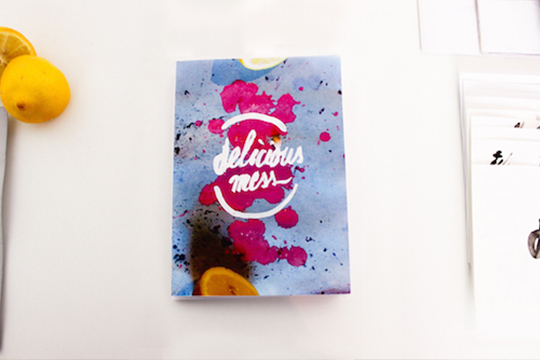 Dirty Hands & Interaction with objects: Documenting and Analysing
The first step was to observe the interaction people had with different objects while they were cooking.
My main point of interest was to understand if having their hands dirty while cooking would change the way they behaved compared to how they normally would if their hands were clean.

I observed how people interacted with Handles, Miscellaneous Objects, and finally a Cookbook.

Soap handles: Experimenting & feedback
The Soap Handles didn’t change the behaviour of people, nor did it change their experience, so I decided to explore other options.

Interacting with miscellaneous objects also proved to fruitless and uninteresting, so I explored the interaction with the cookbook.

How it affected my design
After I made sure the experiments I made worked, I tested random ingredients on people to see their reaction. Based on this, I changed the way I communicated the drawing and the instructions overall. I also discovered several ingredients and techniques that didn’t work.

After testing another prototype, that incorporated a recipe, the reactions were closer to reality. This helped me to understand behaviours in a different scenario and with different people, as well as different phyical formats. There were several unexpected reactions, that influenced my design. This made me understand that the key point was to contextualize and to communicate the instructions clearly, while still leaving it open to interpretation.